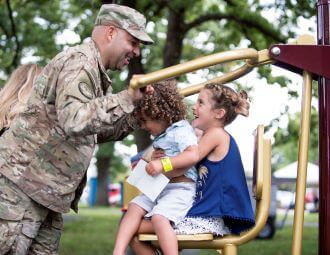 The Military Family Research Institute at Purdue University (MFRI) has announced the winners of its 2021 Barbara Thompson Excellence in Research on Military and Veteran Families Award. The recipients are the authors of research revealing a potential connection between certain biological markers among military and veteran fathers and successful outcomes of the After Deployment Adaptive Parenting Tools (ADAPT) program.

Principal author Na Zhang, an assistant professor in the Department of Human Development and Family Sciences at the University of Connecticut, published the paper with coauthors Abigail Gewirtz, a Foundation Professor in the Department of Psychology at Arizona State University; and John Hoch, a licensed psychologist and clinical researcher with Fraser as well as a research associate with the University of Minnesota.

Their work builds on previous research establishing a connection between emotional regulation and a section of the vagus nerve complex running between the heart and the brain. According to Zhang and her coauthors, the health of this nerve may be a predictor of success for military fathers participating in ADAPT.

The researchers published their article, “The physiological regulation of emotion during social interactions: Vagal flexibility moderates the effects of a military parenting intervention on father involvement in a randomized trial,” in April 2020 in Prevention Science.

They were selected for the annual award after an extensive review of 2020 military family research by a panel of experienced scholars.

Derived from the Latin word “vagus” for “wandering,” the vagus nerve is considered an information superhighway for humans, carrying signals from the brain to various organs.

Among its many functions, the vagus nerve acts to lower heart rate. However, when people face stressful situations such as interpersonal conflict, the vagus nerve is suppressed, which causes the heart rate to rise temporarily, giving people additional energy and focus to successfully manage the conflict. Their heart rate usually then goes down again as the conflict resolves. Researchers believe that variations in heart rate variability indicate that someone can regulate their emotions well.

Emerging research has suggested that the cardiac vagal tone may be related to parenting behaviors. Zhang and her fellow researchers specifically were interested in vagal tone in association with behaviors observed by parents enrolled in ADAPT, a community-based program that assists families during the reintegration phase after a service member’s deployment. Designed to strengthen effective parenting and help prevent children’s mental health issues, the program teaches participants evidence-based parenting practices in areas such as problem solving, discipline, skill encouragement and healthy socialization of children.

Mindfulness and constant practice. Whenever you habitually want to let your thoughts go down a dull depressive-pessimistic channel, immediately stop yourself and switch to positive emotions. Fill your mind with positive thoughts. Start actively looking for positive thoughts in yourself, in the people, situations, and things around you. This warning develops in you an attitude towards yourself and towards life, and long-term practice will make this exercise a worthy habit of a healthy mind positive thkinking. Like attracts like. We tend to attract into our lives those things that we often think about and give our energy to. It is not surprising that often these are negative things and situations, because we give them a huge amount of energy, we are afraid, we experience emotions and “believe” that this will happen. By thinking about something good, you attract good things and situations into your life, as a result, your life really becomes beautiful.

The researchers conducted a clinical study of fathers in the National Guard or reserves who had recently returned from deployment in Iraq and/or Afghanistan. Some families were assigned to participate in the ADAPT program, while others were in the control group and received tip sheets and online resources.

Family members involved in the study wore heart rate monitors throughout the exercises. Fathers, and also mothers in some activities, were observed while interacting with one of their children in a variety of activities, some expected to be more stressful than others.

Researchers followed up a year later, observing parenting behaviors again. Coders then examined heart rate activity against time-stamped videos of parent interactions, looking for patterns. For example, under typical low-stress situations, heart rates would be expected to remain at baseline. However, they would be expected to rise during more stressful times.

Results indicated that fathers with higher vagal flexibility – in essence, more variations in heart rate – showed higher levels of positive involvement at the one-year mark if they had been involved in the ADAPT program. Fathers who had participated in ADAPT but had lower vagal flexibility showed lower levels of positive involvement after one year.

These findings indicate that combat-deployed fathers with higher capabilities in physiological emotional regulation may be more likely to benefit from programs like ADAPT.

Furthermore, heart rate variability could potentially be a useful biomarker for predicting the effectiveness of parenting programs – a first-of-its-kind finding.

About the Thompson Award

MFRI established the Barbara Thompson Award in 2015 to bring visibility to issues of military and veteran families and to help bridge the gap between research and practice. The award is named after Barbara Thompson, who served as director for the Office of Military Family Readiness Policy, Office of the Deputy Assistant Secretary of Defense for Military Community and Family Policy, from 2006 until her retirement in 2017.

Recipients of the Thompson Award come from a wide range of academic fields and a variety of academic institutions. No nominations or applications are accepted. A large panel of accomplished scholars examines every relevant article published during the eligible year, and the final selection is decided through multiple rounds of review, including standardized quantitative assessments.